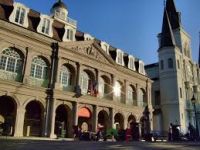 The Cabildo - 701 Chartres St.(504) 568-6968  Admission $6; The museum to the left of the St. Louis Cathedral, the Cabildo served as the capitol for the Spanish colonial government.  It currently houses Louisiana historical artifacts, from the earliest explorers to statehood to post-Civil War reconstruction.  The Louisiana Purchase was signed here in 1803. http://www.crt.state.la.us/louisiana-state-museum

- 751 Chartres St. (800) 568-6968  Admission $6  Museum to the right of the cathedral, the Presbytere has a permanent exhibit of Mardi Gras memorabilia, from Indian costumes to antique Mardi Gras jewels.  http://www.crt.state.la.us/louisiana-state-museum

The Backstreet Cultural Museum - 1116 Henriette Delille St. (504) 522-4806 Admission $8  Located in the heart of the Faubourg Treme, the Backstreet is dedicated to a selection of New Orleans cultural traditions, mostly of the African American community.  Examples are: the social aid and pleasure clubs, second-line parades, brass bands, Mardi Gras Indians, and jazz funerals.  http://www.backstreetmuseum.org

St. Louis Cathedral - 615 Pere Antoine Alley (504) 525-9585 http://www.stlouiscathedral.org  The oldest continuously active cathedral in the United States, it was the focal point of the original settlement, and remains the French Quarter's central landmark.