The Vieux Carre is the oldest neighborhood in New Orleans, developed after the city's founding in 1718 by Jean-Baptiste Le Moyne de Bienville.  Most of the historic buildings in the Quarter were built in the late 18th century, after two devastating fires destroyed most of the old French Colonial Architecture. At the time, New Orleans was under Spanish rule, so much of what you will see--from wrought-iron balconies to common-wall brick houses--reflects that period.

Start at North Peters and Iberville Streets.  Walk four blocks down to Iberville.  In the fourth block, you will pass Acme Oyster House and Felix's, where you can watch oyster shucking.  Turn right on Bourbon Street, known for its strip joints and T-short shops.  Ironically, one of the city's finest Creole restaurants, Galatoire's, is among the first places you will pass.  At the end of the block is Jean Lafitte's Old Absinthe House, which opened its doors in 1807.  Legend has it that pirate Jean Lafitte and Andrew Jackson met on the second floor to plan the victory of the Battle of New Orleans.  Take a right at St. Peter Street.  On this block you will pass Preservation Hall, where you can hear traditional New Orleans jazz, and Pat O'Briens, where you can sip a rum-based Hurricane in the courtyard.  Turn right on Royal Street and window shop among the antique shops, art galleries, and jewelry stores.  Pass the Historic New Orleans Collection, the Beaux Arts Louisiana Supreme Court, and Brennan's, the old-line restaurant known for its sumptuous breakfasts and Bananas Foster.  Turn left on Iberville Street, walk one block to Chartres Street, and turn left again.  Pass K-Paul's Louisiana Kitchen and the Napoleon House, where the mayor of New Orleans, in 1821, offered Napoleon Bonaparte a place to stay during his exile.  A few doors down is the Pharmacy Museum, the one-time apothecary shop of America's first licensed pharmacist.  Continue to the corner of Chartres and St. Peter Streets.  To your left is Le Petit Theatre du Vieux Carre, one of the oldest community theatres in the country.  And straight ahead is Jackson Square and the St. Louis Cathedral, the oldest cathedral in North America.  Facing the cathedral, the Cabildo on the left was the seat of government during the Spanish Colonial Period, and where the Louisiana Purchase was signed in 1803.  To the right is the Presbytere, a former courthouse that now houses a collection of Mardi Gras artifacts and memorabilia.  The red brick buildings on either side of the square are the Upper and Lower Pontalba Buildings, the oldest apartments in the United States.  The square is named for Andrew Jackson, the hero of the Battle of New Orleans. Across Decatur Street is Cafe du Monde, the famous coffee and beignets stand.  (Adapted from Barri Bronston's Walking New Orleans, Wilderness Press, 2015)

The lower part of the French Quarter, between Esplanade Avenue and St. Ann Street, is a mostly residential neighborhood where homes range from restored Creole cottages to French Colonial town houses with exquisite wrought-iron balconies.  Many of the homes have been converted to museums, giving visitors an up-close view of 18th-and 19th-century lifestyles.

Begin at the Old US Mint (Esplanade Avenue and North Peters Street), one of several museums that make up the Louisiana State Museum system.  Built in 1835, the Greek Revival Building served as a mint for both the Union and the Confederacy.  Walk two blocks down Esplanade and turn left on Chartres Street.  At 1133 Chartres is the Soniat House, built in the 1820s by Joseph Soniat Dufossat, a French sugar-plantation owner.  At the end of the block is the Beauregard-Keyes House, a raised center-hall house built in 1826 and one time home to Confederate general P.G.T. Beauregard and novelist Frances Parkinson Keyes.  Across the street is the Old Ursuline Convent, the oldest building in the Mississippi Valley, built in 1753.  Continue down Chartres to the corner of St. Philip Street.  To your right is the popular Creole-Italian restaurant, Irene's Cuisine.  Walk one more block and turn right on Dumaine.  At 632 Dumaine is Madame John's Legacy, a complex of 18th century Louisiana Creole buildings that escaped the Great New Orleans Fire of 1794.  Turn right on Royal Street.  At 900, 906, and 910 Royal Street are the Miltenberger Houses, a row of three townhouses built by the widow whose husband was renowned for his work with yellow fever patients.  The houses, with their cast-iron galleries and floor-to-ceiling windows, are among the most photographed in the French Quarter.  Across the street is the Cornstalk Hotel, famous for its cast-iron fence depicting ears of corn intertwined with morning glories.  Walk two blocks to Royal Street, where you will find The Gallier House museum, the residence of noted architect James Gallier.  At 1140 Royal Street is the LaLaurie House, where wealthy socialite Madame Delphine LaLaurie threw wild parties while slaves lay starving, tortured, and chained behind locked doors.  Take a left on Governor Nicholls Street, walk one block to Bourbon Street and take a left. Walk two blocks to Lafitte's Blacksmith Shop, a tavern built between 1722 and 1732 and is considered one of the oldest structures used as a bar in the United States.  The property is believed to have been used by pirates Jean and Pierre Lafitte as a New Orleans base for their smuggling operation.  Two blocks further, at 739 Bourbon, is Marie Laveau's House of Voodoo souvenir shop.

While the French Quarter was settled  by Creoles during the French and Spanish Colonial periods, the old town of Lafayette, now called the Garden District, was settled by Americans flooding into the city after the Louisiana Purchase.  Language barriers, religious differences, and business practices divided the two cultural groups, leading the Americans to build their own neighborhood upriver.

Start at The Garden District Bookshop at The Rink, 2727 Prytania Street.  There is also a coffee shop, bathrooms, and air conditioning.  Heading downtown on Prytania, notice the cornstalk fence at Colonel Short's Villa at 1448 Fourth Street.  In the next block, at 2605 Prytania Street, is the Briggs-Staub House.  This is the Garden District's only Gothic Revival architecture (unpopular among Protestant Americans because it reminded them of their Roman Catholic Creole antagonists).  Walk two more blocks, and on the downtown, river corner of Prytania and First Street is Toby's Corner, the Garden District's oldest home.  Toby's Corner was built in 1838 for Philadelphia wheelwright Thomas Toby, using the Creole building technique such as raising the house up n brick piers to combat flooding and encourage air circulation.  Contrast its simplicity with 2343 Prytania Street--the Bradish Johnson House and the Louise S. McGehee School.  Paris trained architect James Freret designed this Second Empire-style mansion for sugar factor Bradish Johnson in 1872.  Go back to First Street and turn (left) towards the river and see the Pritchard-Pigott House at 1407 First Street.   Continue down to 1239 First Street, the Brevard-Mahat-Rice House, an example of transitional architecture from Greek Revival to Italianate.  At 1134 First Street is the Payne-Strachan House, where Jefferson Davis, president of the Confederate States of America, died in 1889. Take a right on Camp Street, and another right up Second Street (towards St. Charles Avenue) and a left on Coliseum Street.  On your left, at 1331 Third Street, is the Musson-Bell House, the 1853 home of Michel Musson, one of the few French Creoles living in the Garden District, and the uncle of artist Edgar Degas.  Across the street at 1415 Third Street is the Robinson House, built between 1859 and 1865 by architect Henry Howard for tobacco grower and merchant Walter Robinson.  At 2627 Coliseum Street is the Koch-Mays House built by William Freret for James Eustis, a U.S. Senator and ambassador to France.  The house boasts a full size ballroom.  At 2707 Coliseum Street is the house from the movie The Curious Case of Benjamin Button.  Proceed to Washington Avenue and take a right.  On the corner is the famed Commander's Palace Restaurant.  Across the street is the Lafayette Cemetery.  Established in 1833, it is one of New Orleans' oldest cemeteries, built to accommodate residents of the Garden District.  Tombs are above-ground, and house numerous members of extended families.  It was full by 1840, mostly with victims of yellow fever.   (Adapted from Eyewitness Travel, New Orleans, 2015) 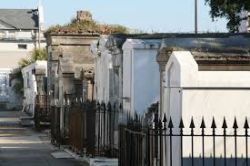 Save Our Cemeteries
http://www.saveourcemeteries.org
They can arrange tours of St. Louis Cemeteries #1 and #2.  These old Roman Catholic cemeteries date from 1789 and contain the graves of many legendary New Orleanians, including Marie Laveau, the voodoo queen.

For safety and preservation reasons, access is restricted to tour groups.  Visit the website for tour times and prices.

This walled cemetery was laid out in 1833 to accommodate the Protestant residents of the Garden District.  By the 1840s, it was full, mostly with victims of yellow fever, and new cemeteries were built along Metairie Ridge.